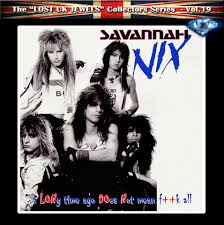 -With a strong image ("Kerrang!" called them "girlie contingent") and a very intriguing sound influenced by bands like Skid Row, Dokken, Motley Crue and Ratt, SAVANNAHNIXplayed the England live-circuit for some years, trying, in the meantime, to find the right label-deal, that -unfortunately for them -never arrived, although the band had been contacted by the likes of MCA Records, Music For Nations and Sanctuary management.

-After some line-up changes, the band called it quit. A real shame considering the high quality and energy of their songs and their live-shows!

-The"LostUK Jewel" CD will featured ALL the material ever recorded by the band, taken from the original master-tapes and professionally remastered by the banditself, including the two songs appearedon the "Metal for Muthas '92" compilation issued in Japan by Pony Canyon, as well as a de-luxe full colour16 pages booklet fullof unseen pics, flyers, memorabiliaand the usual extensiveliner-notesby Rob Evans.-For fans ofearly Skid Row, Shotgun Messiah, Babylon A.D.and Motley Crue !!!