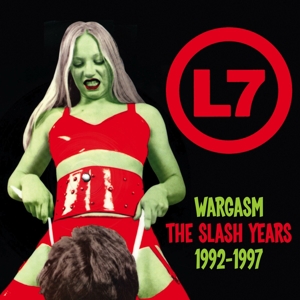 L7 originally formed in Los Angeles in 1985 when Suzi Gardner (guitar, vocals) and Donita Sparks (guitar, vocals) joined forces with Jennifer Finch (bass, vocals). An all female band in a traditionally male-dominated, often sexist rock arena, L7 were happy to court controversy through spirited, occasionally infamous live performances, whilst playing songs often infused with humour as much as bite and bile. Through Rock For Choice they proved to be a band with a sociopolitical conscience too. Having emerged from LA's art punk scene, their music was a mixture of hard rock, alternative rock and punk rock, but they are arguably most synonymous with the grunge movement of the late 1980s and early 1990s. Releasing their self-titled debut on Epitaph Records (home of The Offspring and Bad Religion), their grunge credentials were cemented by the release of second record "Smell The Magic" on Seattle's Sub Pop, some-time home for many grunge lynchpins, including Nirvana, Soundgarden and Mudhoney, among many others.