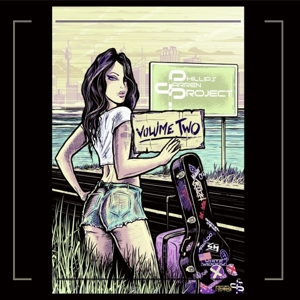 Once again Australian songwriter/producer Darren Phillips, teams up with some of the biggest names in melodic rock. Volume Two picks up where Volume One left off and delivers another 10 tracks full of hooks, riffs and killer vocals.

In 2016 Darren Phillips hosted a melodic rock radio show in his hometown of Sydney Australia. His objective was to let the world, or at the very least, the local listeners know, that melodic rock was alive and strong and hadn't disappeared completely, like it had on commercial radio airwaves.

During the life of the show Darren interviewed several artists from bands around the world. Inevitably the topic turned to songwriting, and with Darren being a songwriter himself, this often led to the sharing of demos or song lyrics. Collaboration ideas soon formed and the path was set for an entire album of songs.

Volume Two was inevitable and with song writing and collaboration well under way, word of it's production soon gained interest from respected Australian label MR Records, with whom Darren signed with for it's release.

Volume Two features several returning guest stars along with plenty of new faces and the result is another melodic rock masterpiece, with every collaborator delivering some of their finest performances.